With so much evidence out there that disputes God, why do people still believe in God?

Because there is no evidence that disproves His existence, only theory, speculation, etc. But:

The evidence of His existence is clear.

And those whom He guides have no doubts. 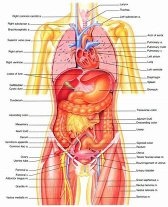 A human is far more complex than a robot, so how can one need intelligence to come about but not the other?

This is a text widget. The Text Widget allows you to add text or HTML to your sidebar. You can use a text widget to display text, links, images, HTML, or a combination of these. Edit them in the Widget section of the Customizer.
%d bloggers like this: